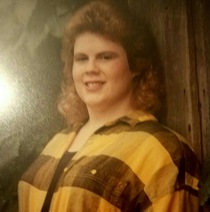 Stephanie Renee Dixson, 46, of Vandalia, MO, formerly of Chillicothe MO, passed away Tuesday, February 21, 2017 at North Care Hospice House in North Kansas City, MO.
Stephanie was born December 10, 1970 in Kirksville MO, the daughter of Richard Don Dixson and Rebecca Ann Bozarth Dixson. She was a 1989 graduate of Chillicothe High School.
She was a member of First Baptist Church in Chillicothe and enjoyed listening to music, and liked dogs and spending time at the lake. She was also a person who loved being around people and her family was the most important thing in her life.
Stephanie is survived by her mother, Rebecca Dixson McCoy of Humphreys MO; her daughters, Gabrielle Dixson and Kyra Burns both of Independence MO; two sisters, Diana Havens (Jerry) of Chillicothe, Christinia Spainhour-George  of Chillicothe; brother, Richard Dixson (Victoria) of Independence MO; several aunts, uncles, nieces and nephews; loved and missed by many.
She was preceded in death by her father, Richard Don Dixson; Paternal grandparents, Othal and Erma Dixson; maternal grandparents, Vern Bozarth  and Eunice Bozarth- Dornberger.
Memorials in honor of Stephanie may be made to Heritage Funeral Home to help the family with expenses and left at or mailed to Heritage Funeral Home, 3141 N. Washington, Chillicothe MO 64601. On-line condolences may be left at www.heritage-becausewecare.com
There has been a cremation and memorial services will be held at 11:00 a.m. Saturday, February 25, 2017 at Heritage Funeral Home, Chillicothe.
A visitation will be held 1 hour prior to the service on Saturday at Heritage Funeral Home.
There will be a private family burial at a later date.
Arrangements are by Heritage Funeral Home, Chillicothe, MO.

To order memorial trees or send flowers to the family in memory of Stephanie Dixson, please visit our flower store.