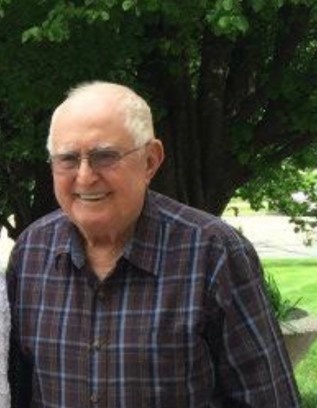 Sam was born October 5, 1925 in Hale, Missouri to parents Samuel Brown Bowling Sr. and Lucy McRoach Bowling. He graduated from Hale High School in May 1943 and by December he enlisted in the United States Marine Corps, where he served as an automatic rifleman and participated in action against the Japanese in World War II in Guam and Iwo Jima. He was honorably discharged in 1946 with the rank of Corporal. In June 1947 he married Betty Chloe Helm and farmed for many years in the Hale area. He later ran restaurants around Hale with the last one being named “The Place” and was a favorite hangout for the young and old alike. Sam was a people person that loved to talk to others. He later worked for Chillicothe Municipal Utilities and retired as Supervisor if the Water Treatment Plant in 1988.

Memorials in honor of Sam may be made to       Hale Memorial Gardens or The Salvation Army. Memorials may be mailed to or left at Heritage Funeral Home, 3141 N. Washington, Chillicothe, MO 64601. Online condolences may be left at www.heritage-becausewecare.com

Visitation will be held Saturday, November 30, 2019 at 11:30 a.m. at Heritage Funeral Home in Chillicothe, Missouri.

To order memorial trees or send flowers to the family in memory of Samuel Bowling Sr., please visit our flower store.