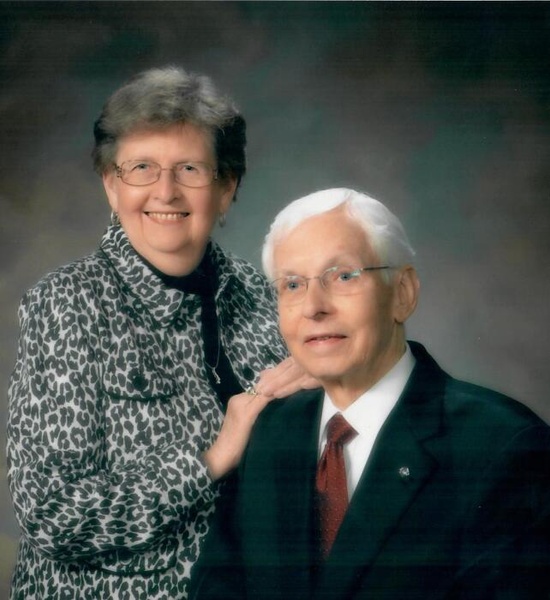 She was born on August 8, 1927, to Albert and Margaret Gattermeir Coffelt. At the age of 6 months, Ruby was adopted by an aunt and uncle, Almon and Jane Barry Gattermeir of Olean, MO, who became her loving parents. She graduated from Olean High School in 1945, William Woods College in 1947, and the University of Missouri in 1949.

On September 4, 1949, she married Bob R. Moss of Eldon, MO, at the Christian Church in Olean. On June 1950, Bob & Ruby moved from Jefferson City, MO, to Chillicothe, MO. Ruby worked for 2 years as Secretary to the Superintendent of the State Training School for Girls and Bob began his career as an Accountant. To this union, four daughters were born.

Ruby was an active member of the Chillicothe First Christian Church until she moved to Riverstone Retirement Community, Kansas City, MO. She then attended Platte Woods United Methodist Church.

While her daughters were growing up, Ruby was involved in their activities, working with the Girls Scouts and teaching Sunday School. She was a past President of Tria Sorosis, Junior Sorosis, and had been an active member of Chapter T, P.E.O. since 1965. She volunteered as a screener with Operation Help for 26 years and had worked in the Gift Shop at Hedrick Medical Center.

Ruby enjoyed reading, needlework, working crossword puzzles, and playing bridge. At one time she and Bob has danced with the Peppy Promenaders Square Dance Club.

She is survived by her daughters and their husbands: Jane & Charles Johnson of Reno, NV; Ann and Bill Bornsheur of Overland Park, KS; Martha and Buzz Taylor of Liberty, MO and Marilyn and John Buck of Tallahassee, FL; seven grandchildren and four great-grandchildren.

Memorials in honor of Ruby can be made to First Christian Church and may be mailed to or left at Heritage Funeral Home, 3141 N. Washington, Chillicothe, Missouri 64601.  Online condolences may be left at www.heritage-becausewecare.net

Graveside services will be held at Edgewood Cemetery at 2:30 p.m.

To order memorial trees or send flowers to the family in memory of Ruby Moss, please visit our flower store.