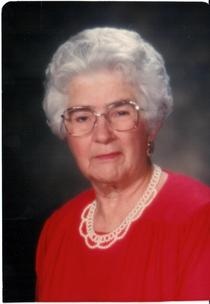 Marjorie Nadine James Still, 94, a life-long resident of Chillicothe, MO, passed away Friday, July 28, 2017 at Hedrick Medical Center.
She was born February 9, 1923 in Sampsel, MO the daughter of Lemuel S. & Bertha Troeger James.
On December 9, 1943 she was united in marriage to Marion F. Still. To this union were two sons, Gary Ray Still & Jimmie Lee Still.
Marjorie spent many years in her occupation of being a caregiver. Before its closing she was an active member and worshiped regularly at the Olive Branch Baptist Church. In 2014 she became a member of Grace Baptist Church of Chillicothe.
She was a farmer at heart. Nothing pleased her more than being around livestock, watching crops grow and to get her two hands in the dirt. She enjoyed traveling and a good card game of pitch. She was also famous for her cinnamon rolls and fried chicken.
Survivors include a sister, Berniece Zullig of Alvin, Texas; Granddaughter, Angie Dillon (Jerry); Grandson Jim Still, of Chillicothe; Great Grandchildren, Emmy & Cole Dillon, Kaitlyn Mathews (Brad), Lake Still, Nichole Hightower (Jacob), Katelyn & Brice Dillon.
She was preceded in death by her parents, husband, her two sons, Jim & Gary and three brothers, Truman, Chester and Bill James.
Marjorie was an example of what it meant to embrace this life while at the same time and with eager anticipation looked forward to her new heavenly home awaiting. She was quick to share and blessed a great many by her abiding faith in her Lord and Savior. She was his faithful servant.
Memorials in honor of Marjorie Still may be made to Grace Baptist Church and left at or mailed to Heritage Funeral Home, 3141 N. Washington, Chillicothe MO 64601. On line condolences may be left at www.heritage-becausewecare.com
Funeral services will be held at 10:00 a.m. on Tuesday, August 1, 2017 at Heritage Funeral Home.
Burial will be at Highland Cemetery, Hamilton, MO.
A visitation will be held from 6:00 p.m. until 8:00 p.m. on Monday, July 31, 2017 at Heritage Funeral Home.

To order memorial trees or send flowers to the family in memory of Marjorie Still, please visit our flower store.