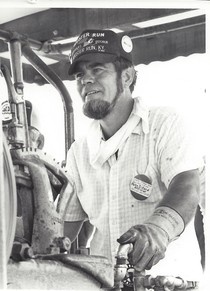 John David Dillard, age 81, of Chillicothe, Missouri passed away Wednesday, June 28, 2017 at the Harry S. Truman Memorial Veterans’ Hospital in Columbia, Missouri. John was born in Chillicothe on April 10, 1936. He graduated from Chillicothe High School in 1954 and served in the Army during the Korean War. John was the second employee hired at Donaldson manufacturing company, and he worked there for more than 30 years. On July 23, 1960, he married Katherine “Kathy” Rae Garlick at Liberty United Method Church and they were married for 40 years at the time of her passing on May 5, 2000.

John and Kathy shared a love of antiques and enjoyed traveling together to sales and shows. John also enjoyed steam engines and trains. He was a member of the Chillicothe Antique Club, the Northwest Missouri Steam and Gas Engine Association, Northeast Missouri Old Threshers, and a member of Liberty United Methodist Church.

John was preceded in death by his parents Hadley Christopher and Edna Ferne Dillard, and wife of 40 years, Kathy. He is survived by his daughter, Penny Rae Hilke and her husband Laron of Freeburg, Missouri; brother, Joe Dillard and his wife Betty of Columbia, Missouri; 2 grandchildren, Katie Rae West of Vienna, Missouri and Zachary John West of Meta, Missouri, and numerous nieces, nephews and friends.

Graveside services will be held at 11:00 AM on Friday, June 30, 2017 at Resthaven Memorial Gardens, Highway 65 & Sioux Drive in Chillicothe, Missouri.

The family would like to express our thanks for the wonderful help and care given by the staff of the Harry S. Truman Memorial Veterans’ Hospital and Compassus-Gallatin, Missouri. If desired, friends may make memorial contributions to the following:
Harry S. Truman Memorial Veterans’ Hospital Compassus –Gallatin
Voluntary Service 117 North Main
Attention: Sylvia Jackson Gallatin, Missouri 64640
800 Hospital Drive
Columbia, Missouri 65201

Arrangements are under the direction of Heritage Funeral Home, Chillicothe, Missouri

To order memorial trees or send flowers to the family in memory of John Dillard, please visit our flower store.