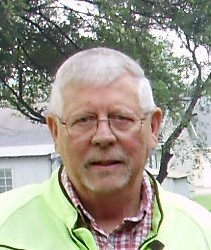 James Gene “Jim” Barnes, 78 of Chillicothe died August 26, 2019 at Centerpoint Medical Center in Independence, Missouri following a battle with esophageal cancer.  Jim was born October 8, 1940 in Chillicothe, the son of E. B. “Pappy” and Reba Spence Barnes.  He graduated from Chillicothe High School in 1958 and was a member of the Free Methodist Church in Chillicothe.  Jim worked for Producer’s Creamery in Chillicothe then went to work for Chillicothe Municipal Utilities in 1962 in the electric department.  He retired from CMU in 2007 as electric distribution superintendent after 45 years of service.  Jim enjoyed many hobbies and was an avid motorcyclist.  He traveled extensively throughout the United States on his BMW motorcycles, visiting nearly every state and Canadian province, including four trips to Alaska.  As a young man, Jim raced motorcycles, then in his retirement enjoyed rebuilding and restoring vintage bikes.  He enjoyed hunting and fishing, competition shooting, building and flying radio controlled airplanes and at the time of his death was building a wooden kayak. He enjoyed spending time with family, friends and his cats.  Jim married Cinthia Gail Lightfoot on September 27, 1986 at the United Methodist Church in Chillicothe.  She survives of the home on Cowgill Street.  He is also survived by a daughter, Dana Lynn Barnes of Chillicothe and a son, Steven James Barnes of Chillicothe from his previous marriage to Sharon Ballantyne.  Jim is survived by brothers Joe (Sue) of Monett, John (Julie) of Chillicothe and Mike (Cindy) of Franklin, IL and sisters Birdie Ann (Bill) Kieffer of Chillicothe and Penny (Ben) Chauvin of League City, TX.  He is also survived by an aunt, Dorothy (Bill) Sutton of Chillicothe, his brother-in-law Dale (Diana) Lightfoot of Hale and numerous nieces and nephews and their families.   He was preceded in death by his parents.  Services will be held at Heritage Funeral Home in Chillicothe on Tuesday, Sept. 3 with family visitation from 10:00 a.m. until 12:00 following by a memorial service at 12:00. A private inurnment will be held at Edgewood Cemetery at a later date.  In lieu of flowers, memorials may be made to the Forrest O. Triplett Memorial Animal Shelter in Chillicothe.

Memorials in honor of Jim may be mailed to or left at Heritage Funeral Home, 3141 N. Washington, Chillicothe, MO 64601.

Online condolences may be left at www.heritage-becausewecare.com .

Arrangements are under the care of Heritage Funeral Home located in Chillicothe Missouri.

To order memorial trees or send flowers to the family in memory of James Barnes, please visit our flower store.