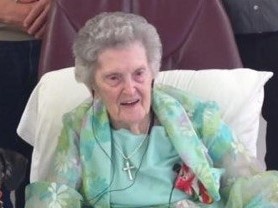 Cleo Marjorie Thomas, 92, of Chillicothe, passed away Wednesday, August 8, 2018 at the Baptist Home in Chillicothe.

Cleo was born on July 2, 1926 in Wheeling, the daughter of Arley Devila and Gladys Maude Harvey Mace. She was a graduate of Wheeling High School and became a Licensed Practical Nurse, working many years at Hedrick Medical Center. Cleo married Max Thomas on June 22, 1978 in Chillicothe.

Cleo was a lifelong servant of the Lord at the Wheeling Baptist Church. She enjoyed many things in her full life such as sewing, reading and most of all her time with her kids and grandchildren.

Memorials in honor of Cleo may be made to Wheeling Baptist Church or the Baptist Home in Chillicothe and can be mailed to or left at Heritage Funeral Home, Chillicothe, MO. 64601. On line condolences can be left at www.heritage-becausewecare.com

To order memorial trees or send flowers to the family in memory of Cleo Thomas, please visit our flower store.