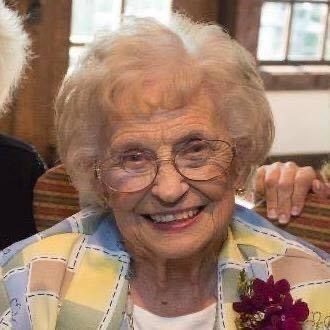 Betty Jo was born on September 24, 1928 to parents Cecil and Sarah Dawkins. On March 31, 1950 she married Howard Lyle Beaird in Chillicothe, Missouri.

She worked as a service representative for Southwestern Bell and at Linn County Family Services. Her hobbies included collecting antique dolls, working crossword puzzles, sewing, and listening to talk radio.

Betty Jo was a member of the Wheeling Baptist Church and she belonged to Beta Sigma Phi, the garden club in Wheeling, the New York extension club in Wheeling, and the Red Hat Society. She volunteered with 4-H, Cub Scouts, and Girl Scouts.

Memorials in honor of Betty Jo to be made to Wheeling Cemetery or Wheeling Baptist Church and may be mailed to or left at Heritage Funeral Home, 3141 N. Washington, Chillicothe, Missouri 64601. Online condolences may be left at www.heritage-becausewecare.com

Burial will be at the Wheeling Cemetery.

To order memorial trees or send flowers to the family in memory of Betty Beaird, please visit our flower store.