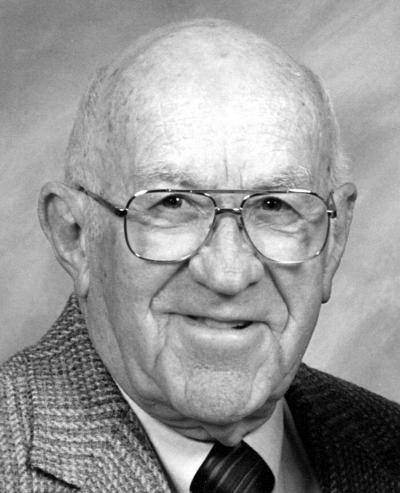 With the support of the Chillicothe, MO community, Allen’s grandfather, Allen Moore I, founded the Chillicothe Normal School in 1890 (soon thereafter renamed Chillicothe Business College (CBC).  Upon the death of the founder in 1907, his son, Allen Moore II, took over the leadership of the college and led CBC until his death in 1945.   It grew rapidly, was a positive influence for Chillicothe, and enabled many young people in the Midwest area to obtain a business education.   The Moore family was immersed in the activities of the college, as were many Chillicothe citizens.

CBC survived World War II, but by the late 1940’s, the state universities and community colleges had secured a large portion of business education and training, and the college was sold to a private investor.

Allen graduated from Chillicothe High School in 1941, then attended Wentworth Military Academy from 1941-43 prior to being drafted into the Army during World War II.  During the war, he served in the Army in the Pacific theater, seeing combat first in New Caledonia, then Fiji, then Bougainville in the Solomons, and then in the Philippines, receiving a Bronze Star and rising to the rank of sergeant.

Following the war, Allen continued his education, graduating from University of Missouri in 1948.  He was a diehard Missouri Tiger fan --  never losing hope for a winning season,  and maintained a strong allegiance to his fraternity, Phi Delta Theta.  While at the University he formed many strong friendships that lasted a lifetime.

After graduating from college, Allen returned to Chillicothe and began a new business as an independent property, casualty, and business insurance agent. He was successful in this endeavor and it was his lifelong career. He was active in civic, community, and church affairs, such as Rotary International, the Presbyterian Church, the Republican Party, Edgewood Cemetery Association and the Salvation Army.

In the early 1950s Allen renewed a friendship with a long time Chillicothe friend, Anne Meinershagen Austin, and soon thereafter they were married.  Anne had married Bill Austin of nearby Trenton, MO;  they had had two children before Bill was killed in a naval plane crash in 1951.  After marrying Anne, Allen adopted her two children, David and Ellen, and supported and guided them as his own.  In 1956, Anne and Allen welcomed a daughter, Martha, and their family was complete.

Allen and Anne also had the pleasure of hosting Chillicothe’s first AFS exchange student, Grecia Aguilera, in 1965-66.     Their friendship blossomed into a decades-long bond with the Aguilera family, including Allen and Anne’s several trips to Chile, and with reciprocal trips by Grecia, her parents and brothers, and Grecia’s children.

In his youth, Allen enthusiastically participated in football, basketball, tennis, swimming and diving, and golf. Golf was his passion in adulthood, and he spent many happy days on courses in Missouri, Arizona, around the country, and even abroad. He and Anne traveled extensively in retirement, preferring to stay in Bed and Breakfasts to meet the local folk.

Allen will be remembered by those who knew him as competitive, decisive, outgoing, generous, and fun-loving – a man who cherished his family and friends, and his hometown of Chillicothe.

Even in his last years, complicated by health issues, Allen maintained a positive outlook.  We will miss his smiles, jokes, stories, and many kindnesses.

A memorial service will be held in Chillicothe in September, 2019.  Should friends desire to honor Allen’s memory, contributions may be sent to:  Scholarship Fund;   Grand River Technical School of Chillicothe;   1200 Fair St.;  Chillicothe, MO  64601

To order memorial trees or send flowers to the family in memory of Allen Moore III, please visit our flower store.